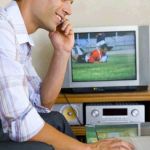 Everything is a fight for the users attention; not at least from the users themselves. As everything is becoming increasingly mobile, so our way of interacting with technology is being influenced by these new behavioural patterns. People use their cell phones/tablets/etc on the toilet, in waiting rooms or public transit and increasingly while doing other things that were previously regarded as entertainment by themselves; e.g. playing games on the cell phone while watching TV or tweeting from the talks of a conference.

As software designers we should take these behavioural patterns seriously. The expectations and habits being formed by the users of these mobile devices follow them into their interactions with supermarket checkout counters, work tools and even other people!

An easy, practical take away that will work for most types of software design is to assume your user is just tuning in and then evaluate what is the most important thing in her view right now? How much information can they reasonable take in? However it is important not to oversimplify; find out what it is necessary to be able to do and then do that – split it up if you have to.

Other easy attention-grabbers are color changes and moving objects. They capture attention quickly and sometime subtly. However a lot of things are competing for our user’s attention, including the users themselves.

Technology as an extension of ourselves

Atherton also briefly touched upon the amount of outsourcing people do, users are becoming used to relying on technology to ease the cognitive loads. People extend parts of their memory and bodily functions to technology. People expect their technology to help them.

Everything is a fight for the users attention; not at least from the users themselves. As everything is becoming increasingly mobile, so our way of interacting with technology is being...

← Why we shouldn’t be Agile
Webformularen; en forhindringsbane for din bruger →