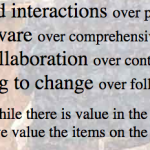 When the agile manifesto was published it was groundbreaking. It was the sign of an young, rebellious industry. But now the agile movement is 13 years old and well integrated into almost every software company that takes itself seriously.

So why are people declaring Agile to be dead?

agile is not Agile.

The agile manifesto revolves around 4 simple values that have been passed on and pushed into almost every type of software company or enterprise.

Katherine Kirk describes how the goal of the agile is to create a rotational hierarchy, where the most knowledgeable person for a specific task becomes the leader. If a new task arises the most proficient for this type of problem takes the role as leader. However this rotational hierarchy inevitably ends up butting heads with the static structures of management, labelled universally and across the board as psychopaths by Kirk (who displays a lack of the empathy and compassion that she later works so hard in advocating).

She, if any, works hard on establishing the “us” and “them”, where the developers are labelled as the heroical introverts cruelly held down by the management with their inevitable psychopathic tendencies.

However, as became evident in the stories told by Corry and Richter people, not just management, inevitable converge into processes, whether they are deemed traditionally agile or not.

Again and again it is postulated that agility is NOT a fixed set of methods it’s a state of mind. It’s a willingness to constantly be open to and explore the methods and work patterns that work optimally for this specific development team and for this specific task. However, the agile movement has become Agile – a buzzword that is thrown around and not an actual mindset.

Focus on the process

What becomes clear from talk after talk about how to employ the agile mindset is that most people respond to, and end up in, fixed structures and processes. Processes were they lean on the agile tools, like scrum which at its worst is useless, but at least not harmful.

I think the software industry needs to be brave and realize; maybe we shouldn’t be agile. Rather we should accept that people need a certain element of predictability and stability. An element that should be found in processes.

We should focus on the construction of processes rather than the abolishment. However that requires a new mindset; that maybe not all static processes are evil, maybe a certain sense of stability can actually lead to more exploration and risk-tasking. Some people are not interested in constantly re-evaluating and redefining the minutiae of processes every month, but would rather focus on work. A stable process would give them the flexibility to do that.

The agile manifesto has revolutionised the software industry, but it has turned into the rigidity is was trying to deflect. We have blindly followed the values of other’s when the point was to create our own. It’s time to do something new. It’s time to proudly declare; I am not Agile!

When the agile manifesto was published it was groundbreaking. It was the sign of an young, rebellious industry. But now the agile movement is 13 years old and well integrated...

7 kommentarer for “Why we shouldn’t be Agile”